You are here: Home / News / News / Why we must remember Srebrenica 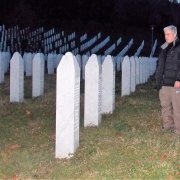 This year I attended many events in East Lothian marking the end of World War 1 100 years ago, not least the moving drumhead service by the Moderator of the Church of Scotland in Haddington on 10th November.
The following day I found myself standing in remembrance as another (former) moderator, the Very Rev Lorna Hood, said a few words on the exact spot where that war began, rather than ended. I was in Sarajevo, Bosnia, on the street corner where, in 1914, Serb nationalist Gavrilo Princip assassinated Archduke Ferdinand, igniting the chain of events which engulfed the world in war for four long years.
Our main purpose though was to learn about a much more recent conflict, the Balkans war of the 1990s, on a delegation organised by the “Remembering Srebrenica Scotland” charity, which Lorna chairs.
Just as WW2 revealed that we had not learned from that first “war to end all wars”, so in 1995 the Bosnian town of Srebrenica showed that we had not learned the lessons of the Holocaust, as genocide took place again on European soil while the world stood by and watched.
Yugoslavia’s three nationalities, Serb, Croat and Bosnian Muslim lived together, peacefully. However when the fall of communism led to the break-up of Yugoslavia, war came to Bosnia in 1992, driven in part by Serbia’s desire to create a “Greater Serbia” including large parts of Bosnia, from which they planned to remove Croats and Muslims in what became known as “ethnic cleansing”.
Our delegation leader Resad Trbonja was 19, living in Sarajevo. On 7th April 1992 he woke to find his city under siege, surrounded by Serbian artillery and snipers on the mountains overlooking the city. The siege would last four years, the longest in modern warfare, longer than Stalingrad. An average of 300 mortars landed in the city every day, 12,000 on the worst day.
Resad, who lived through, and fought in, the siege explained that Sarajevo regressed two centuries overnight. No water, no electricity, no phones. The Serbian army allowed minimal UN aid into the city sporadically, but nothing else.
The survival of the siege is a story of human courage, spirit and defiance. Our first visit was to the remnants of a tunnel, dug under Sarajevo airport to reach Bosnian held territory on the other side. This tiny tunnel was the only way in or out for four years.
Through this tunnel extra aid came, for example from Edinburgh Direct Aid who drove lorries of supplies from Edinburgh to help Sarajevans. My own predecessor, John Home Robertson, then MP (later MSP) for East Lothian spent several parliamentary recesses as a volunteer lorry driver. It was dangerous work, and one of his colleagues died on the notorious road known as “snipers alley”.
Perhaps the most affecting visit in Sarajevo was to the War Childhood Museum, where those who grew up in the siege display the things they kept to remind them of what it was like, and tell their story.
A homemade cardboard knight’s breastplate made by a brother who later died, a cuddly toy from a UN delivery, cuddled threadbare because it was the only toy, a homemade “uniform” for a childrens choir which rehearsed and performed in defiance of bombs and bullets, the remains of a playpark “jungle gym” kept to remember the day a mortar tore it apart and killed your friend.
No-one who visits this museum will forget it.
That is true too of Srebrenica. This was supposedly a “safe haven” protected by UN troops. Yet on 11th July Serbian paramilitary units overran it. Thousands of Bosnian Muslims sought refuge in the UN base at a disused factory. When we visited the museum now sited there, survivor Hasan Hasanovic explained to us how UN soldiers stood by as women and children were herded on to buses and deported, while their men were separated and removed in lorries. They were systematically murdered nearby. Thousands more who tried to escape through the forest were hunted down, shepherded into a meadow, and shot. In all 8,372 Bosnian Muslim men and boys were slaughtered at Srebrenica.
Finally, the international community acted. In a matter of days air strikes lifted the siege of Sarajevo, drove Serbian paramilitaries out of much of the territory they had occupied, and forced agreement to a peace deal in Dayton, Ohio.
Srebrenica was not the only genocide in this war, but it is emblematic, because it happened under the noses of the UN, and because of the bravery of the Mothers of Srebrenica, who returned home to find out what happened to their husbands and sons, refused to be silenced and demanded justice.
This led to the International commission on Missing Persons and the forensic anthropology unit in Tuzla where we saw the incredible work done to identify remains using DNA. Over 7,000 victims of genocide have now been identified, allowing their families to grieve, and to bury them at the final stop of our visit.
We arrive at the cemetery at Potaceri, outside Srebrenica, as the sun sets. On the hillside 7,000 stark white tombstones bring home the enormity of what was done over only a few days a mere 20 years or so ago.
Over 8,000 died at Srebrenica. 11,000 perished in Sarajevo. 50,000 women suffered rape as an act of war, millions fled their homes, some even finding their way to the refugee reception centre at Cheylesmore Lodge in North Berwick.
All the survivors I met asked the same question. Why did so much suffering have to happen before the international community acted to stop it? In telling us their story, they relived their own pain. They did so in the hope that we learn the lessons of Bosnia. We need only look at Syria or Yemen to know that we have not.
That is why we must remember Srebrenica.
If any local groups would like to hear more about the work of Remembering Srebrenica please contact Iain’s office on 01620 822 711.
http://www.iaingraymsp.co.uk/wp-content/uploads/2018/11/Potaceri-cemetery.jpg 1828 3300 Iain https://www.iaingraymsp.co.uk/wp-content/uploads/2018/05/logo5.png Iain2018-11-29 12:03:522018-11-29 12:03:52Why we must remember Srebrenica