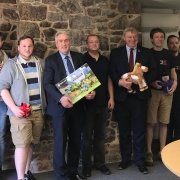 Established in 2005, 4J has its Headquarters in Dundee, while most of the software development work is undertaken in East Linton. It has an extremely experienced core team of designers, technology and games programmers and artists. The company’s ethos is to combine innovation, creativity and technical excellence with efficient production practices.

Minecraft has now sold over 176 million copies worldwide, making it the best selling game ever. 4J is best known for developing Minecraft Console Edition which is a version of the game released on Xbox One, Xbox 360, PlayStation 4, PlayStation 3, PlayStation Vita, Wii U and Nintendo Switch, and this version has contributed over 66 million sales to the overall figure.

Following this remarkable milestone, Mr Whitfield and Mr Gray tabled motions in their respective parliaments marking the achievement and congratulating the 4J team in East Linton on their part in this success. The pair were welcomed to 4J’s East Linton office by CEO Paddy Burns to meet the team and hear more about the work undertaken there and at the company’s HQ in Dundee.

“There are many remarkable success stories in East Lothian and 4J Studios is right up there with the best of them. Staff in the East Linton office have played a central role in Minecraft’s stunning worldwide success and can rightly be very proud of their achievement.

“I enjoyed the opportunity to meet the team in East Linton and discuss how they developed Minecraft for consoles, as well as some of the company’s plans for developing new games. Its clear that 4J is set to go from strength to strength and it’s great that East Lothian is a part of the company’s success.”

“It is wonderful that a business located here in East Lothian has enjoyed such phenomenal global success with Minecraft. It is a game that has brought so much enjoyment to children across the world and has also been an inspiration to anyone interested in gaming technology.

“I was pleased to help mark the game’s international success and the contribution of the team in East Linton with a motion at Westminster and look forward to continuing to follow 4J’s innovative work in the future.”

“It’s been incredible to have played a part in the Minecraft phenomenon for the past eight years, and to be able to do this from East Linton in East Lothian shows anything is possible!”

Find out more about 4J Studios at www.4jstudios.com/