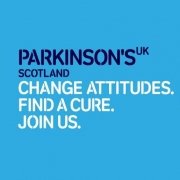 Parkinson’s is the fastest growing neurological condition in the world and about 12,400 people in Scotland have it.

This November, Parkinson’s UK Scotland is aiming to help the public understand the impact of Parkinson’s through Time for Can, its new awareness campaign. The campaign was launched yesterday with a new TV advert.

With over 40 recognised symptoms, Parkinson’s can lead to a lot of ‘can’ts’. Each of these has an impact on someone’s life. But the message from Parkinson’s UK’s new campaign is that there is also the potential for a lot of cans, including finding a cure.

“My own family has been affected by Parkinson’s and I know first hand the impact it can have on people’s lives. However, as treatments improve many more people don’t let the condition stop them doing the important things they want do in their work or private lives.

“That is an important message and I’m pleased to support the #TimeForCan campaign to help improve understanding of the condition and raise funds for better care and finding a cure.”