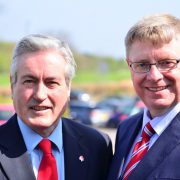 County parliamentarians Iain Gray MSP and Martin Whitfield MP have welcomed the inclusion of East Linton station in a newly-published rail delivery plans for the next five years.

The Network Rail Control Period (CP) 6 Delivery Plan for Scotland, which covers the period 2019 to 2024, mentions enhancement of the East Coast Main Line corridor “including early deliverable of new stations at East Linton and Reston”.

While no specific date is mentioned for the completion of the project, Mr Gray and Mr Whitfield hope its inclusion in the plan means the important infrastructure will now go ahead by 2024 at the latest.

“I have been campaigning for the delivery of the new rail station at East Linton since I first became East Lothian’s MSP in 2007. Successive Rail Ministers have delayed the project over the years, resulting in fears that it would never be implemented.

“With the publication of this delivery plan we finally have something more concrete to aim for. I hope that we can now finally see the new station, and consequent local rail services, completed and available for local people as rapidly as possible.

“RAGES and other local campaigners deserve great credit for their persistence in pressing the Scottish Government and Network Rail to deliver this important piece of rail infrastructure.”

“I have raised East Linton station with UK Ministers in Parliament and in ministerial meetings and asked them to press Network Rail to ensure that it is delivered, so I’m pleased to see it in black and white in the new plan.

“The station at East Linton will not only bring great benefits to the village itself but should also lead to improved local services between Berwick and Edinburgh, benefiting the whole of the County.”