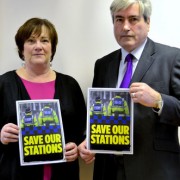 Local Labour politicians have welcomed confirmation from police chiefs that the front counter at Tranent police station will remain open to the public.

Police Scotland have confirmed via email that following further consultation with key stakeholders, the decision has been made to keep Tranent police station front counter provision open between Monday to Friday 0900 – 1700 hours. As set out in the amended proposal circulated in December, the counter provision at Haddington police station will change to Monday to Friday 0900 -1700 hours.

Iain Gray MSP, Fiona O’Donnell MP, and Labour Fa’side councillors, Donald Grant, Jim Gillies and Shamin Akhtar, led the opposition to the original plans to close the front desk. Their campaign included securing hundreds of local signatures for a petition urging Police Scotland to rethink the plans, making a strong submission against the closure to the public counter consultation, and tabling a motion opposing the proposal at East Lothian Council.

“I welcome this final confirmation that the front desk at Tranent police station will remain open. Local people, including Fa’side’s councillors and Tranent and Elphinstone Community Council, played a key part in campaigning against the original closure proposal, and I want to pay tribute to everyone in Tranent and the surrounding villages who supported the campaign.

“Senior police officers in East Lothian also deserve credit for listening to the views of local people and rethinking their original plans. As the SNP Scottish Government’s £140m cuts to policing begin to bite, further difficult decisions will have to be made on local policing priorities, and I hope that this willingness to engage and listen will continue.”

“The proposed closure of the police public counter in Tranent raised many uncertainties and fears among local people and the communities of Fa’side were united in their opposition to it. I think it was that strong desire to keep the front desk open and the station accessible to the public that made the difference and ensured that the police acted on the concerns.

“I also want to add my thanks to all the people across Fa’side who signed our petition and supported the campaign.”

Under the new arrangements, the front counter provision for East Lothian will be:-

The new operating times will take effect on the 3rd March 2014.

Letter from Holyrood: An end to locally delivered justice
Scroll to top