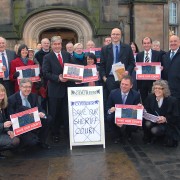 East Lothian Council’s latest bid to persuade the SNP Scottish Government to rethink its planned closure of Haddington’s Sheriff and JP courts has been welcomed by local MSP Iain Gray.

The Council’s chief executive Angela Leitch has written to the Cabinet Secretary for Justice to highlight concerns about recent figures for Edinburgh’s JP and Sheriff Courts, which show significant increases in the number of summary criminal cases being dealt with in the three months ending August 2013.

Councillors have expressed concerns about the figures because they fear that the closure next year of Haddington’s courts will lead to further increases in the number of cases being dealt with. This could have a negative impact on the efficient administration of justice, the interests of victims and witnesses, who could face longer waiting times till a possible court appearance, and the effectiveness of any community-based punishment ordered by the court.

In light of this information, the Council has asked Justice Secretary Kenny MacAskill to reconsider his decision to close Haddington Sheriff Court in January next year. Mr Gray has also written to the Justice Secretary to back the Council’s concerns and urge him to think again.

“Those of us who led the campaign to save Haddington’s courts consistently expressed concerns about the capacity of Edinburgh’s courts to deal with the extra workload that the SNP’s court closures will create. These figures make it clear that Edinburgh’s courts are already bursting at the seams and adding cases from East Lothian and other smaller courts will put real pressure on their ability to administer justice efficiently.

“I don’t want victims and witnesses in East Lothian to face longer and longer waits for court appearances and for justice to become inefficient and remote. East Lothian Council is absolutely right to highlight these concerns and press the Justice Secretary to reconsider his closure plans. I will back their call and continue to make the case for the retention of Haddington’s courts to preserve local justice in the county.”

Happy New Year to all ELN readers. This is the year when Scots decide if they wish to live in a separate independent Scotland, or a Scotland which is part of the United Kingdom with its own devolved parliament.

Late last year the SNP Scottish Government published its “White Paper” on independence. It had several hundred pages of “Questions and Answers”. Unfortunately these were the likes of “What will Scotland be called?” (Answer – “Scotland”), and none of the important questions about why Scotland would be better off were answered at all.

The SNP want to keep the British Pound, the British Queen, British TV programmes, the British energy market, and a British banking system. They claim that we would simply carry on as members of the EU, and of NATO and that the rest of the United Kingdom would happily pay for Scottish renewable energy, build naval ships in Scottish yards and bail out Scottish banks if they failed.

Independent experts have rubbished these claims, but even if they were true this is a strange kind of independence, with no control at all over our economy including things like mortgage rates. The truth is that the way to keep all these things, and the benefits the White Paper admits we need, is to remain part of the United Kingdom.

The biggest promise in the White Paper is an increase in childcare availability. Yet that is already devolved and the Scottish government already control childcare provision! It really is a cheek to tell Scottish families that the government will not extend childcare unless they vote the way the SNP want in the referendum.

Constituents have complained to me about the hundreds of thousands of pounds of taxpayers’ money being spent on producing and promoting this document. That has been raised many times in Parliament, but the SNP Government’s view is that they won an election in 2011 and so they are entitled to spend as much public money as they wish on their independence project. My view is that they would be better spending that money on things like childcare and education right now.