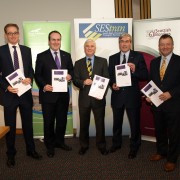 County MSP Iain Gray has welcomed the conclusions of the final study into the proposal to provide a local rail service from Edinburgh to Dunbar and Berwick, including the development of a new station at East Linton.

The study, which was commissioned by SEStran, East Lothian Council and Scottish Borders Council, underlines the strong business case for the introduction of Edinburgh to Berwick local services. It also supports the plan to open new stations at East Linton and one in the Borders at Reston.

Speaking after a Holyrood photocall with colleagues, councillors and local rail campaign RAGES to deliver the study to the Transport Minister, Iain Gray MSP said:

“This study provides a clear and comprehensive business case for the proposed Edinburgh-Dunbar-Berwick rail service. It also underpins the strong economic and social case for a new station at East Linton and the benefits it would bring for the local community there. I welcome its findings and the important boost it gives to the argument in favour of these new rail services.

“Although the report indicates that such a service would need a subsidy, that is true of almost all rail services in Scotland, and the level identified is very affordable in a franchise which sees government invest hundreds of millions. This is not too much to ask for East Lothian. In any case many of us believe that once the service was up and running, and East Linton station open, passenger numbers would outstrip the predictions in the report and reduce the need for subsidy. All our stations in East Lothian have seen significant passenger growth.

“It is now vital that the Scottish Government accepts the report’s findings and includes it as part of the documentation provided to all bidders for the next ScotRail franchise, which could deliver the new services. If Ministers now choose to do the right thing, then another significant hurdle will have been overcome on the way to securing this important investment in local rail services.”

Parliamentarians send message of solidarity for human rights this Christmas