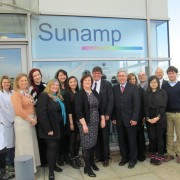 The pair met with some of the company’s staff, including Chief Executive Andrew Bissell, and partners from the University of Edinburgh, to discuss its work and future development. They were also given a tour of its facility, including an explanation of the processes involved in the production of the heat batteries.

They were also told about the importance of the company’s tie-in with Edinburgh University, including Professor Colin Pulham who was also present at the meeting, and the supportive role played by East Lothian Council from which the company rents its office space.

“I had been looking forward to visiting Sunamp after having highlighted its heat batteries in a Holyrood debate earlier in the year. The company is really at the cutting edge of developing innovative renewable heat technology to make heating more efficient, with huge potential benefits for both domestic and industrial energy users.

“I’m also pleased that Sunamp chose to make East Lothian its base, and that East Lothian Council has been so supportive of the company from the outset. It’s just the kind of high tech business we need to attract to the county to provide skilled job opportunities for local people.”

“Sunamp is developing technology that will be vitally important if we are step up efforts against climate change and tackling fuel poverty. The work it is doing is fascinating and I was really pleased to have the opportunity to learn more about the firm’s rapid development so far and its future plans.

“It was also useful to hear about the support the business has received from various public agencies, including the UK’s innovation agency, the Technology Strategy Board, and the Department for Energy and Climate Change, which have been critical in enabling it to reach this point.”

“Sunamp are delighted to have hosted today’s visit and thank Fiona O’Donnell and Iain Gray for their interest. The support of East Lothian Council has been instrumental in the progress and growth of our business and we have hugely benefitted from our choice of location in East Lothian, facilitating a very close partnership with the University of Edinburgh and access to a local skilled workforce. We look forward to working in partnership on reducing fuel poverty, where Sunamp technology will have a major impact.”

“This has been and continues to be one of the most exciting industrial collaborations that I have experienced. It demonstrates the tremendous impact that a successful academic/industrial interaction can achieve and has proved to be an excellent training experience for both me and the younger researchers who have worked closely with Sunamp.”

MSP encourages constituents to tell the NHS what they think

Letter from Holyrood: Students get a taste of politics
Scroll to top