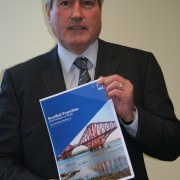 County MSP Iain Gray has welcomed a ‘major step forward’ in the campaign for a new train station in East Linton and improved services between Dunbar and Edinburgh after the project was included in an important rail franchise renewal document published last week.

Mr Gray has been campaigning with RAGES (Rail Action Group, East of Scotland), East Lothian Council, Scottish Borders Council and other politicians for a proper local train service from Dunbar to Edinburgh with a new new rail halt in East Linton, for a number of years.

The MSP believes that the inclusion of the project in this draft franchise renewal document for Scottish rail services, which means companies that tender for the franchise must include a price for delivering the improved Dunbar-Edinburgh services, is a real coup and brings the project closer to being realised than it has ever got before.

However, Mr Gray has also warned that the campaign is not over yet and that pressure must be maintained on the Scottish Government to provide the funding necessary to secure the delivery of the station and service improvements.

“I am delighted that plans for a new rail halt at East Linton and improved services between Dunbar and Edinburgh have been included in this document. To have the service we have been campaigning for included in the draft franchise is undoubtedly a huge step forward and gets us closer than ever to achieving the goal of reopening the station in East Linton.

“It’s a real victory for RAGES, the Councils and everyone else who has campaigned on this issue for so many years. It’s also the clearest sign yet that the Scottish Government is serious about the project and will ensure that bidders for the franchise have to include figures for delivering a new station and service improvements for Dunbar.

“However, there are still some further important hurdles to get over before the project is realised, and the key issue that remains outstanding is Scottish Government funding. Despite the inclusion of the project in the franchise document, Ministers have still not committed to make funding available to pay for the improvements.

“In fact, we need to redouble our efforts now to push the project all the way to a successful conclusion and secure the delivery of a new rail station in East Linton and improved services between Dunbar and Edinburgh. That is exactly what I intend to do.”

Land in East Linton, adjacent to Orchardfield, has already been designated by East Lothian Council for a new rail halt and car park. A study commissioned by East Lothian and Scottish Borders Councils to explore the projected cost of reopening the two stations is almost complete and will help inform the submissions of bidders for the Scotrail franchise.

The ScotRail Franchise Draft Invitation to Tender document issued by Transport Scotland invites companies to bid to run a range of inter-city, regional and suburban rail services on the Scottish Rail Network from 1 April 2015. The full document can be downloaded at www.transportscotland.gov.uk/files/documents/rail/ScotRail-Draft-ITT.pdf