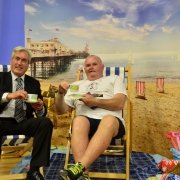 A motion marking the award of the MBE to Scott Glynn in the Queen’s Birthday Honours List has been tabled at Holyrood by local MSP, Iain Gray.

As well as congratulating Scott on his success in being awarded the honour, the motion also highlights the outstanding achievements made through his Walk with Scott Foundation fundraising activities for which he received the MBE.

“Scott Glynn has been a high profile and well liked local character for many years. Since 2013, his Walk with Scott Foundation fundraising activities have resulted in significant benefits for local charities, community groups and good causes.

“Scott’s own personal health struggle has also been well documented in recent years, but he never let that stop his charitable work. He is a genuine local hero and fully deserves this recognition of everything he has done to support people in need across East Lothian.”

That the Parliament congratulates the Tranent resident, Scott Glynn, on being appointed an MBE for services to charity in The Queen’s Birthday Honours List; notes that Scott started his Walk with Scott fundraising activities in 2013 to assist local causes and organisations, before formally establishing the Walk with Scott Foundation in 2017; further notes that the foundation has now raised over £300,000 in support of dozens of different community groups and charities, and believes that Scott’s outstanding efforts on behalf of communities and individuals across East Lothian makes him a very worthy appointment of an MBE.