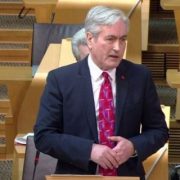 Iain Gray MSP has raised East Lothian’s soaring population growth and the impact it is having on local services in Parliament, with a call for the Scottish Government to address the issue with fair funding to meet the additional demand.

In reply to Mr Gray’s question, Aileen Campbell, Cabinet Secretary for Communities Local Government, failed to even acknowledge the rapid growth, which has seen East Lothian’s population increase more than any other local authority area over the last 20 years.

“Over the past 20 years, East Lothian has experienced the highest percentage increase in population in Scotland, with growth of three times the Scottish average. Additionally, over 10,000 new homes are being built in the county as a requirement of the Scottish Government’s national plan.

“Such growth requires significant extra resources in order to meet the increased demand on local services, but East Lothian Council has not received such additional investment, leaving it with a gap of over £4 million in its revenue funding for 2021-22.

“I asked the Cabinet Secretary for Communities and Local Government, Aileen Campbell, to explain why East Lothian is not being given the fair funding that it needs to support local services with this huge growth.

“Unfortunately, she failed to even acknowledge the impact of the population increase and fell back on a lame excuse about funding formulas being determined by COSLA. This is not good enough and underlines the fact that fairness for East Lothian is just not on the SNP Scottish Government’s radar.”

Confirmation that county is least connected part of Lothians