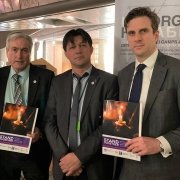 Mr Gray joined fellow MSP Daniel Johnson in sponsoring the National Holocaust Memorial Day Commemoration in the Scottish Parliament on the day itself (27th January), which was hosted by Interfaith Scotland.

At the event, First Minister Nicola Sturgeon, welcomed to the Parliament, Janine Webber, survivor of the Holocaust and Hasan Hasanovic, survivor of the Bosnian Genocide.  Both told their heart breaking and moving stories to an audience of guests from across Scotland, including pupils from North Berwick High School.

“Holocaust Memorial Day is an essential reminder of the millions of people who were murdered, or whose lives were changed forever, during the Holocaust and in subsequent genocides around the globe.

“This year is particularly poignant as we observe the 75th anniversary of the liberation of Auschwitz and 25 years since the genocide in Srebrenica. The theme of this year’s Holocaust Memorial Day – ‘Stand Together’ – underlines the vital importance of communities uniting against hatred and prejudice in all forms and working to promote a strong, inclusive and respectful society.

“I have never visited Auschwitz but I have met Hasan Hasanovic a couple of times at the Genocide Memorial centre in Srebrenica, so it was good to welcome him to Holyrood and help him tell his story more widely.

“The various activities at Holyrood over the last week have helped to mark these anniversaries in a respectful way but to also help ensure that the lessons are remembered. I’m especially pleased that so many children have been involved in marking Holocaust Memorial Day this year and hope it has helped to inform them about these vital issues.”