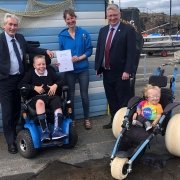 Former Prime Minister Theresa May gave Alison the award, which recognises outstanding volunteers who are making a change in their community and inspiring others, last month before her premiership ended.

Gray and Whitfield visited the charity’s beach hut at North Berwick harbour to congratulate Alison and her team on the award and catch up on its latest activity.

“It’s always a pleasure to visit Beach Wheelchairs and hear about their latest activity. It’s clear from chatting to Alison and the volunteers that the charity is going from strength to strength, with its new electric chair proving to be particularly popular, and I wish them continued success in the years ahead.”

“It was a real honour to formally present Alison with her Points of Light Award. Beach Wheelchairs has had a powerful impact over the last few years by facilitating access to the beach for those who could not previously enjoy the experience. It’s exactly the kind of volunteer-led initiative that the award was designed to recognise and celebrate.”

“This award is very much a reflection of the masses of hours so many people dedicate in North Berwick and Portobello and our joint project in Seton Sands. I can’t believe how far we’ve come and wonder what the future holds for us! I’m delighted that it raises the profile of our charity on a national platform and indeed highlights access issues for people with disabilities.

“Thank you to all volunteers, supporters and customers and here’s to many more years of picnics on the beach and first paddles!”

There is a similar cross-party approach to the UK programme and MPs from different parties often present their constituents with their Points of Light awards.