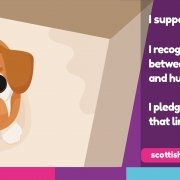 The return of a campaign on the significant link between animal abuse and human violence has been welcomed by Iain Gray MSP.

First launched 22 years ago, the Scottish SPCA’s First Strike campaign is back with the aim of highlighting the link between animal cruelty and violence towards humans and encouraging those who may be suffering abuse and own a pet to seek help.

For many people, the mistreatment of animals can be the start of a dangerous path leading to abuse towards humans and other violent acts, with those who are cruel to animals being five times more likely to be violent towards other humans.

The SSPCA have programmes like Animal Guardians which are there to intervene at an early stage, working with children as young as four to help them understand the power of positive human-animal interactions and the emotions and sentience animals have.

“Research shows that people who are cruel towards animals are five times more likely to be violent or abusive towards people. These startling figures underline the crucial importance of identifying people and animals who are being mistreated and helping to break the link between animal cruelty and harm to humans.

“The SSPCA also want to help those who may own a pet and be suffering abuse to get help. In households where one person is abusive to another, a family pet can be exploited as a method of control, with the threat of violence towards the pet often being used to force the victim to stay or do what they want.

“In many cases, the person who is being abused will not leave that environment for fear of the consequences the pet could face. Anyone facing these circumstances can contact the SSPCA in full confidence if they and their pet need help.

“I welcome the work the SSPCA is doing with their partners in the police, social work and other key services to highlight these important issues and provide support for people and animals in abusive situations.”

Find out more about the campaign and the help the SSPCA can provide at www.scottishspca.org/firststrike