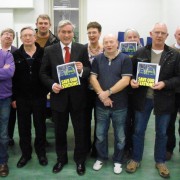 Members of Tranent and Elphinstone Community Council have voiced their concerns about the impact of proposals to close the front counter at Tranent police station and withdraw local traffic warden services to local MSP Iain Gray.

The community councillors spoke out at their most recent meeting when Mr Gray attended to listen to their concerns and tell them about the work he has been doing to oppose the Police Scotland plans. Mr Gray was joined at the meeting by Fa’side ward councillors Donald Grant, Jim Gillies and Shamin Akhtar.

There was universal agreement that the plans are bad news for the town and risk setting back local policing. Members were also content to give their backing to the campaign that Mr Gray and Labour’s Fa’side ward councillors have been running against the proposals.

“I welcomed the opportunity to speak to members of Tranent and Elphinstone Community Council about how the Police Scotland proposals will impact on the town and surrounding communities. They agreed that closing Tranent police station’s front counter and withdrawing traffic wardens is bad news for the local area. I will continue to do all I can to defeat the plans and keep Tranent’s police station open and accessible to local people.”

“I’ve yet to speak to anyone in the town who agrees with these damaging proposals on local policing. Tranent needs a police station that is open to the public and it’s good to know that our MSP and local councillors are fighting for that. I also want to thank Iain for attending the meeting to discuss this important issue with us.”

Mr Gray and his Labour colleagues continue to collect signatures for their petition against the closure of the front counter at Tranent police station and withdrawal of local traffic warden services. The petition can be downloaded at http://www.eastlothianlabourparty.co.uk/uploads/c2301f8c-0fa1-1d94-f1af-8e6b55de6e3d.pdf or copies are also available to sign at 65 High Street, Tranent.