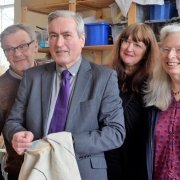 Iain Gray MSP has visited the studio of local artist Andrew Crummy in Cockenzie to find out more about the progress of his new Tapestry about Cancer Survival.

Mr Crummy announced his idea for the tapestry last year following his own treatment for cancer. During his treatment and after, he was sketching about his experience, the people he met and the support he received.

At this time, it was suggested to Andrew that he should produce a Cancer Tapestry, depicting the treatment, the science and the care involved. He took the idea and ran with it and work on the tapestry began last month.

“Andrew and the many volunteers he has worked with have really put East Lothian at the heart of tapestry making in Scotland over recent years, with several amazing pieces of work being produced here.

“This new Cancer Tapestry is set to be as spectacular as his previous ones. The tapestry will help to tell the story of those who have survived cancer and celebrate the science and care that goes into treating people with the condition.

“It is a hugely impressive and moving piece of work and it was a privilege to do a little stitching under the guidance of Andrew and his team of volunteers. I commend Andrew on this latest project and look forward to seeing the completed tapestry.”

Anyone interested in participating in the tapestry work should either look for the Cancer Tapestry public group on Facebook or email cancertapestry@gmail.com.