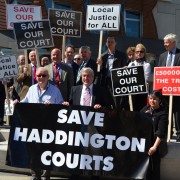 County MSP Iain Gray has written to the newly-appointed SNP Justice Secretary, Michael Matheson, to urge him to ‘revisit and reverse’ his predecessor’s deeply flawed decision to close Haddington Justice of the Peace and Sheriff Courts.

Mr Gray’s letter highlights that, with the court due to close in January next year, there is only a very short window of opportunity for Mr Matheson to look again at the detrimental impact the decision is set to have on local people’s experience of the justice system.

It also sets out a summary of the many powerful arguments that have been employed against the closure, including the effect it will have on victims, witnesses, the police and local law firms, the detrimental impact on the administration of justice, and the significant and damaging effect on the town itself.

Mr Gray has also highlighted the fact that while the closure is meant to save the Scottish Court Service money, the cost to the public purse in lost time will far outweigh any savings there might be in the short term.

His letter concludes by urging Mr Matheson to seek out all the information about the closure, including the report published by an independent forensic accountant demonstrating the lack of savings, and look again at the decision while there is still time.

“Nicola Sturgeon has said that she is open minded about listening to suggestions on how her Government can do things better. The deeply flawed decision to close Haddington’s courts, made with little or no real evidence to justify it and clearly against the wishes of local people, is an obvious contender for Ministers to reconsider.

“The case made by former Justice Secretary Kenny MacAskill for closing our courts was weak to begin with and has got weaker with every passing month. With only a few weeks now before the planned closure, I have urged the new Justice Secretary to revisit the evidence from local experts and reverse this wrong-headed decision. This is the last chance for the Scottish Government to see sense and do the right thing before it’s too late.”

Letter from Holyrood: More to be done on the living wage
Scroll to top