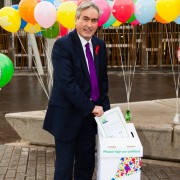 Iain Gray MSP is supporting a campaign to promote the unique and vital role of health visitors in the health and well-being of families and local communities in East Lothian and across Scotland.

Mr Gray joined health professionals and campaigners from around Scotland at the Scottish Parliament this week to mark the handover of the Health visitors for Scotland petition to the Minister for Children and Young People, Aileen Campbell. Campaigners are calling on the Scottish Government to seize the opportunity to improve the health and wellbeing of Scotland’s children by ensuring all families have access to health visitors.

The petition highlights the unique and essential contribution health visitors make to the health and wellbeing of families and local communities across Scotland. It also calls on the Scottish Government to enshrine a statutory entitlement to universal health visiting services and to ensure that the Named Person for the 0 – 5 age group is the health visitor in the Children and Young People Bill.

The Named Person is a concept that is already being rolled out in many areas of Scotland, and acts as a first point of contact between a child, their family and key services. The post, which was developed in response to feedback from parents, is filled by midwives for the first 10 days of a child’s life, then the health visitor, before responsibility is handed over to schools at the age of 5. The Children and Young People Bill – which passed Stage 1 last week – aims to enshrine the Named Person in law.

“I know from speaking to parents in East Lothian just how much they value the unique expertise of health visitors and the important role they play supporting families with very young children. However, workloads for health visitors have increased dramatically in recent years, putting them under increased pressure and undermining the service in some areas.

“RCN Scotland’s Health Visitors for Scotland campaign is a welcome attempt to focus on this essential role and reaffirm Scotland’s commitment to health visiting as a vital service in the early years. I was pleased to join campaigners at the Parliament and hope that the Scottish Government will listen to the concerns that have been highlighted and take steps to strengthen the health visiting service.”

“Timely action by health visitors can reduce problems in later childhood, promote self-care and resilience, and prevent ill health throughout life. It is, therefore, a crucial preventative service in the early years.

“That’s why we think this opportunity should be seized to enshrine in law Scotland’s commitment to a universal health visiting service, and that the Children and Young People Bill should explicitly state that the Named Person for age 0 – 5 be a health visitor. While this is the Scottish Government’s intention, if it is not made clear in the Bill we could see the dilution of this vital role and our universal health visiting service which would be bad news for children and for families.”

More details on the campaign and petition can be found at www.rcn.org.uk/scotlandhealthvisitors