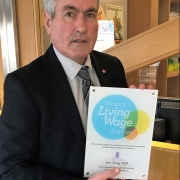 Mr Gray is a long-standing supporter of the campaign for a living wage. He has paid at least the real Living Wage, which is currently £9.30 an hour, to all the staff in his office for many years, but this accreditation formally recognises this for the first time.

Living Wage Scotland was established in April 2014 with the aim of increasing the number of employers in Scotland who are recognised for paying their staff the Living Wage. Hosted by The Poverty Alliance, the Initiative works in partnership with the Living Wage Foundation and is funded by the Scottish Government.

The vast majority of MSPs are now accredited as Living Wage employers, helping to set an example within their constituencies and encouraging other employers to sign up.

“Throughout my time in Parliament I have always been a strong supporter of the Living Wage and ensured that all my staff have been paid at least the Living Wage.

“Significant progress has been made in Scotland over recent years with more than 1700 employers now accredited Living Wage employers. Much of the credit for this must go to Living Wage Scotland for the work it has done with employers.

“There is no doubt that paying the real Living Wage changes people’s lives. It’s a principled stance which shows staff that their employer values them and wants to reward them properly for their contribution.

“I want to encourage more employers in East Lothian to explore the various benefits of paying the real Living Wage and seeking accreditation for it.”

For more information about the real Living Wage and how to apply for accreditation, visit https://scottishlivingwage.org/

“Some” reassurance from Minister on East Linton rail station