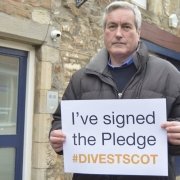 Iain Gray MSP has signed up to a pledge supporting calls for the Scottish Government and Parliament to divest from fossil fuels and invest in a just transition to a zero carbon economy.

Mr Gray’s support for the Divest Scotland pledge comes as Scottish Labour has committed to ambitious amendments to the Climate Change (Scotland) Bill, including a target of net zero emissions by 2050 at the latest and robust interim target – all underpinned and safeguarded by a Just Transition Commission that is statutory, independent, and well resourced.

“I fully agree that the time has come for the Scottish Government and Parliament to make ethical environmental investments for a sustainable future, for workers, communities, children and grandchildren.

“My colleagues have argued for environmental investment criteria to be central to the Scottish National Investment Bank. It would show leadership and solidarity if the Scottish Parliamentary Pension Scheme led the way in introducing an ethical finance policy.

“These actions will give assurance that, when planned for over an appropriate timescale, we can all confidently see divestment from fossil fuels, and positive investment in a just transition to a net zero emissions economy and society.”