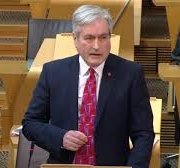 With just a fortnight left before the Scottish Parliament enters recess and the start of the election campaign period, Iain Gray has made his final set piece speech as the East Lothian constituency’s MSP.

Speaking during the Stage 3 debate on the Redress for Survivors (Historical Child Abuse in Care) (Scotland) Bill, Mr Gray reflected on some of the main achievements of the Parliament during the 14 years he has spent representing East Lothian and the four years he spent as one of the original intake of MSPs in 1999.

Mr Gray also used the final opportunity in Parliament to reiterate his belief that East Lothian is the “best constituency, best county and best part of Scotland in which to live or work”.

“I was elected to the Scottish Parliament in 1999, serving as MSP for Edinburgh Pentlands from 1999 – 2003, and then for East Lothian from 2007 to 2021. I will be retiring when the current parliamentary session ends for the election in May, so when I spoke yesterday it was my last parliamentary speech.

“I was participating in the final stage debate on the Redress for Survivors (Historical Child Abuse in Care) Bill, which parliament went on to pass unanimously, but I took the chance to reflect on what the parliament has achieved in 22 years, what I think it should concentrate on, and to say a few thank yous.

“One of those reflections is that progress has in some ways stalled when it comes to using the powers of the parliament to tackle issues such as child poverty and drug deaths. As I said in the speech, it’s one of the most powerful devolved legislatures anywhere in the world and should be using every power it has to right the wrongs of poverty and injustice.

“It was also a last opportunity to restate what a privilege it has been to represent East Lothian and my belief that it is not only the best constituency at Holyrood, but also the best place to live or work in Scotland. While I will retire from Parliament in May, I will remain an East Lothian resident and continue to support and be an advocate for our county and everything it has to offer.”

The full speech can be watched here.