You are here: Home1 / News2 / News3 / Iain demands clarity for parents on return of schools 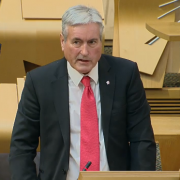 Speaking during today’s Topical Questions in the Scottish Parliament, Iain Gray MSP asked the Cabinet Secretary for Education John Swinney why the Scottish Government have not published a detailed route map for the re-opening of Scotland’s schools in August.

Mr Swinney’s defensive reply, perhaps understandable given the shambolic communication on the issue over the last couple of days, was that his framework published nearly a month ago provides such a route map.

In fact, the framework only considers questions about the partial re-opening in August with no plan or timetable for getting children back to school full-time.

“The Scottish Government have produced a detailed route map for the reopening of economic and social life, it’s not perfect, but at least it is a timetabled plan towards normality for every part of Scotland. So why on earth is there not a route map for a return to full time school for every pupil in Scotland?

“I’ve had emails from parents across Scotland asking for more details about schools returning to normal and for greater clarity from the Scottish Government following the mixed messages from John Swinney and Nicola Sturgeon over the past 48 hours.

“I’m not sure those angry and concerned parents will be reassured by this response. The framework he refers to simply gets us to partially open schools in August – for only one day per week in some parts of Scotland. It has no plan never mind a timetable for moving our children back to full time schooling.”

Mr Gray’s question and the Cabinet Secretary’s response can be viewed here.

Save Our Scotland campaign