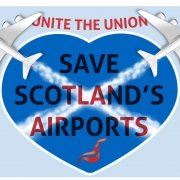 Mr Gray has co-signed a letter to the First Minister calling for action on the civil aviation crisis and signed a parliamentary motion tabled by his colleague Colin Smyth MSP backing the Unite campaign.

He has sent the following response to constituents who have contacted him about the union’s campaign:

Thank you for your correspondence regarding Unite Scotland’s Campaign: Save Scotland’s Airports.

Scottish Labour stands with Unite Scotland in this campaign, and agrees that a sector specific response is needed.

I have signed the attached letter to the First Minister and signed the following motion in Parliament lodged by my colleague Colin Smyth, backing the Save Scotland’s Airport campaign:

S5M-22313: Save Scotland’s Airports
That the Parliament recognises the value of the civil aviation sector to Scotland’s economy; is concerned at the analysis by the Fraser of Allander Institute, which suggests that the loss of 1,500 jobs in the sector would result in the loss of 2,330 jobs in total, and a subsequent £140 million loss to the wider economy; commends the work of everyone in the sector throughout this unprecedented period; welcomes the Saves Scotland’s Airports campaign by Unite the Union; urges the Scottish Government to reiterate its commitment to supporting the sector’s recovery and to work with trade unions and other stakeholders to agree a set of interventions to support it, but believes that any future support must be conditional on the protection of jobs and the safeguarding of terms and conditions of employment in line with the Fair Work principles.

Earlier this month Richard Leonard, and the Scottish Labour Party, also brought the concerns of Scottish Airport workers to the attention of the First Minister. We are deeply concerned that some companies are still attempting to fire and rehire its own workers, with their terms and conditions slashed by almost half. Scottish Labour, in line with Unite Scotland, has therefore asked the Scottish Government to make the 100 per cent business rate reliefs conditional on good employment practices, in order to protect jobs.  In addition, Richard Leonard wrote to the UK Government encouraging them to work with the industry and with trades unions to develop a strategy that supports the industry emerge from this crisis, without the need for such an attack on the terms and conditions of the workforce.

Scotland’s airport workers should not be the ‘collateral damage’ during this pandemic. Scottish Labour is therefore supporting Unite Scotland’s demands to have sector specific support for Civil Air Transport in Scotland, including the extension of the Government Job Retention Scheme.

On 16th July, in response to a statement given to the Scottish Parliament by Michael Matheson, Cabinet Secretary for Transport, Infrastructure and Connectivity, my colleagues Colin Smyth and Pauline McNeill pressed for a commitment from the Scottish Government to fully engage with the trade unions in shaping a sector specific plan to save Scotland’s airports. You can read the Parliament Transport statement and debate here.

If our economy is to weather the storm of coronavirus we must prevent the loss of jobs across Scotland.  Urgent action is needed to protect jobs and livelihoods which  is why Scottish Labour has launched a ‘Jobs for Good’ campaign, calling on the Scottish Government to commit to safeguarding jobs in order to save our economy.

Scottish Labour is committed to working with the trade unions in calling for the protection of Scotland’s aviation workers. We will continue to campaign for sector specific support, conditionality in line with fair work, removal of fire and rehire proposals, and the extension of redundancy consultations, to ensure we save Scotland’s Airports.

Thank you once again for contacting me on this issue.

With only a fortnight to go, clear plan needed to reopen schools
Scroll to top