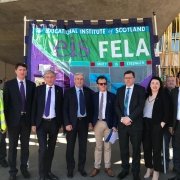 County MSP Iain Gray has challenged the First Minister to intervene in the college lecturers pay dispute in order to help bring about a fair resolution for staff.

Mr Gray raised the issue with Ms Sturgeon on the same day as EIS-FELA (Further Education Lecturers’ Association) members from across Scotland held a rally at the Scottish Parliament, which he addressed as Sottish Labour’s Shadow Education Secretary.

“Our colleges are a critical part of Scotland’s education sector. Several lecturers from East Lothian have asked for my backing with their pay dispute. I gave them my unequivocal support when I addressed the EIS-FELA rally at Holyrood this week.

“At FMQs I also challenged Nicola Sturgeon to intervene in the dispute and help resolve it with a fair cost of living increase for lecturers, which they have been denied for three years. Unfortunately, she refused to get involved.

“I will continue to support EIS-FELA members in their pursuit of a fair pay increase and also keep urging Ministers to do the right thing and intervene on their behalf to settle the dispute.”