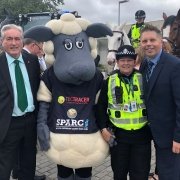 Iain Gray MSP has given his support to the Scottish Partnership Against Rural Crime (SPARC) at Parliament after a new report revealed a huge increase in the cost of crime in rural areas over the last year.

Launched in East Lothian, SPARC is a partnership between The Scottish Government, Police Scotland, NFU Scotland, Scottish Land and Estates, The Crown Office and Procurator Fiscal Service and many other agricultural organisations.

The partnership aims to help to educate and inform farmers and those working within Scotland’s agricultural sector on the action they can take to help prevent crime on farms.

The awareness raising at the Scottish Parliament followed the publication of a report by NFU Mutual last month showing the cost of rural theft in the UK hitting a seven-year peak, with the biggest percentage increase – 62 percent – in Scotland.

“The NFU Mutual report on rural crime in Scotland makes for alarming reading. A 62% increase in the cost of rural crime in just one year is a startling figure, and clearly very worrying for those who are affected.

“It also highlights the importance of the SPARC initiative and doing everything possible to help rural communities fight crime in their areas. I was delighted to support the partnership at Holyrood and agree to help promote it to rural communities in East Lothian.

“Rural crime covers a wide range of activities and is becoming more sophisticated all the time. It is vital that farmers, landowners and others in Scotland’s agricultural community understand what steps they can take to help prevent rural crime from happening.

“SPARC was launched here in East Lothian so I hope farmers and others in our agricultural sector will take heed of its message and take steps to protect their farms, livestock and equipment being targeted by rural crime.”