You are here: Home1 / News2 / News3 / Iain announces he will retire from Holyrood next year 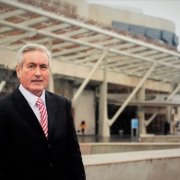 Iain Gray MSP has announced that he will not contest next year’s elections to the Scottish Parliament.

Mr Gray, the former Scottish Labour leader who has served as the constituency’s MSP since 2007, told local party members this week that he will not be asking them to re-select him as the party’s candidate for 2021.

In an email to members, Mr Gray announced his decision to retire from Parliament and thanked them for their support over the last 13 years, during which he was twice re-elected to Holyrood as the county’s MSP.  Mr Gray was originally elected as an MSP in Edinburgh Pentlands constituency, in 1999.

Speaking about his decision to stand down, Iain Gray MSP said:

“Serving the East Lothian constituency since 2007 has been one of the greatest honours of my life and I’ve enjoyed every moment of representing our unique and very special area at Holyrood. I often say that East Lothian is the best constituency in Scotland, and the best place in Scotland to live, and I mean it.

“I had the privilege of being part of the first Scottish Parliament intake in 1999, before East Lothian gave me the opportunity to return to Holyrood in 2007 and then serve as my party’s leader, and I will always be grateful for that.

“The decision to stand down is not an easy one, and was made even harder by the incredibly difficult circumstances we have all faced over the last three months. However, I will be 64 next year, almost 69 by the end of the next parliament and  after more than 20 years at the frontline of Scottish politics, next year is the right time for me to step aside and hand over to someone else to represent East Lothian’s interests.

“I really, genuinely do want to spend more time with my family, especially my wife Gil who has supported me unstintingly through all the ups and downs of political life, and the seven fantastic grandchildren with whom I am now blessed.

“I want to say a huge thank-you to all of the constituents who’ve shown me such support and kindness over the last 13 years, and the many local organisations, charities and businesses that have welcomed me during that time. Special thanks are due to all of my constituency office staff over the years, the best in the business, who do the hard work while I take the credit.

“I will, of course, continue to serve as the county’s MSP for the rest of my term and intend to do so to the best of my ability until the election in May next year.”