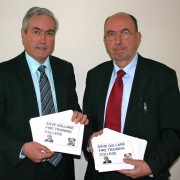 Iain Gray MSP and Councillor Jim Goodfellow have expressed their thanks to people in Gullane for supporting their campaign against plans to close the Scottish Fire Service College.

Well over 100 local people have returned a campaign postcard calling for a rethink on the planned closure, which it is widely agreed will have an adverse effect on the village and the wider local economy.

Mr Gray will now pass the postcards on to members of the Board of the Scottish Fire and Rescue Service and ask them to consider local people’s concerns about the impact of its closure proposal.

“People in Gullane have clearly demonstrated their opposition to the proposal to close the Fire Service College. Most local people agree that it would be bad for the village and want the Scottish Fire and Rescue Board to rethink its plans and keep the college open. I hope that Board members will listen to the clear view expressed by local people, the council, and elected representatives, and look again at its options.”

“The Fire College has been a fixture in Gullane for some 60 years and if the closure goes ahead there’s no doubt it will damage the local economy. The number of postcards returned certainly underlines the strength of feeling locally about this issue. The Council has made a strong case for the college to be retained, but it now remains to be seen whether the Fire and Rescue Service will reconsider the closure.”