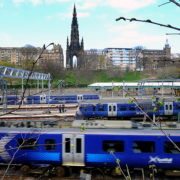 Iain Gray MSP has joined a coalition of organisations and cross-party group of MSPs in calling for public ownership of Scotland’s rail services from January 2021.

In a joint letter, the group of 14 organisations representing Scotland’s rail workers, passengers, disabled people, pensioners, environmentalists, civil society and 20 MSPs wrote to First Minister Nicola Sturgeon to call for the Scottish Government to take Scotland’s rail passenger services into public ownership from the start of next year.

“The rail franchise system hasn’t worked for passengers and the SNP government has failed deliver the world-leading rail service we were promised.

“With less than a month to go until the ScotRail and Caledonian Sleeper Emergency Measures Agreements expire, I’m pleased to have signed this joint letter to the First Minister calling for our rail passenger services to be taken into public ownership from January next year.

“The Scottish Government has the power to end the failed rail franchises now and replace it with a publicly-owned People’s ScotRail to deliver a rail system that works for passengers, not the profits of private rail firms.”

Further details about the letter and its contents can be found at www.rmt.org.uk/news/coalition-call-for-public-ownership-of-scotlands-railway/