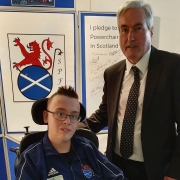 Powerchair football is a growing sport in Scotland with teams competing in the Scottish Powerchair Football Association Leagues. Players can either compete by having special bumpers attached to their own wheelchairs or, for more serious competition, they can use specially modified chairs sports Powerchairs that are faster and more responsive.

Currently, Scotland has six powerchair football clubs with nine teams, all of which are giving disabled people the chance to take part in exciting competition as well as helping to reduce isolation, improve mental wellbeing and build the self-confidence of players.

Played by 4-a-side teams on a pitch roughly the size of a basketball court, the sport is open to powered wheelchair users and is currently the only team sport open to disabled athletes who use a powered chair.

Scotland has its own national league with two divisions and two cup competitions. In addition, a national powerchair football team, formed from players across the country will be hosting a tri-nations tournament against Northern Ireland and the Republic of Ireland at the sportscotland National Centre in Inverclyde.

After signing a pledge in Holyrood to support powerchair football in Scotland Iain Gray MSP said:

“The SPFA is doing great work in giving power wheelchair users in Scotland the opportunity to play football and to participate in a team sport has so many benefits. Powerchair football allows people to develop skills, discipline and friendships as well as giving players a focus that benefits them both physically and mentally.

“I will be writing to Joe FitzPatrick MSP, the Minister for Sport, and asking him to consider greater funding and support for powerchair football and other sports aimed at disabled individuals in East Lothian. I would also encourage all local authorities and sportscotland to consider their current facilities and ask if they meet the needs of all Scottish Para athletes.”