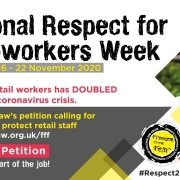 16 to 22 November 2020 is Respect for Shopworkers Week, the annual campaign run by the shopworkers’ union Usdaw.

Despite the crucially important role they have played as key workers, attacks on shopworkers have doubled during the coronavirus crisis.

Usdaw is highlighting these shocking figures as part of its annual Respect for Shopworkers Week, which forms part of its Freedom From Fear campaign for greater protection for shopworkers.

Iain Gray MSP is a long term supporter of the union’s campaign and is promoting its petition for the law to be strengthened.

“Retail workers have made a vital contribution to their communities during the pandemic, putting themselves at risk to help keep the nation fed during lockdown.

“But many have continued to face physical or verbal attacks in the workplace and this always increases in the run-up to Christmas. Every worker should be treated with respect and dignity at work and I’m proud to support Respect For Shopworkers Week again this year.”

Find out more about the campaign at www.usdaw.org.uk/…/Respect-for-Shopworkers-Week

Road Safety Week 2020 – No Need to Speed
Scroll to top