You are here: Home1 / News2 / News3 / Backing campaign to call out sexism in the media 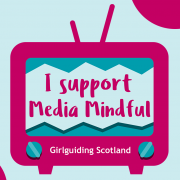 Iain Gray MSP is supporting a new Girlguiding Scotland campaign against gender stereotypes and sexism in the media.

Media Mindful has been created by Girlguiding Scotland’s Speak Out champions, a group of young women aged 15-23, and aims to support girls and young women to challenge sexism and negative gender stereotypes in the media.

As part of the campaign, the Speak Out group have created an activity pack designed to help girls develop media literacy skills, developed with support from University of Strathclyde and Gender Equal Media (GEM) Scotland. Girlguiding members can earn the Media Mindful badge by completing activities in the pack.

As part of its Week of Action (23-29 November), the campaign is highlighting findings from its Girls in Scotland 2020 research on the various ways that the media impacts negatively on girls and young women. For example, more than half of girls aged 11-21 have seen adverts online that made them feel pressured to look different.

43 per cent of girls aged felt they didn’t have or weren’t sure if they had the skills to understand what is real and not real in the news, media and online, while 68 per cent feel newspapers, magazines and influencers on social media need to do more to stop reinforcing gender stereotypes.

Speaking about his support for the campaign, Iain Gray MSP said:

“I commend Girlguiding Scotland on its Media Mindful campaign and the important work it is undertaking with girls and young women across Scotland to challenge stereotypes and sexism in the media.

“Too often the media uses gender stereotypes or focuses on the appearance of women and girls, rather than their abilities, skills and experience. This can prevent girls and young women from pursuing their passions and reinforces the idea that their value is only in how they look.

“I want this to change as my grand-daughters grow up and for the media to stop gender stereotyping and negative portrayals of women and girls. All of us have a responsibility to help make this happen and I welcome the contribution of this campaign.”

The campaign aims to empower and support girls to:

Find out more about the campaign and how to get involved at www.girlguidingscotland.org.uk/media-mindful