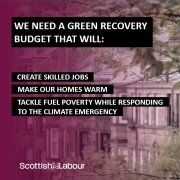 Friends of the Earth Scotland, Living Rent and Existing Homes Alliance say the Scottish budget should be increased to £244million for the coming year, up from just £145.6m allocated for over five years in the recent budget, to help achieve environment goals.

Currently, one in four households in Scotland lives in fuel poverty, with homes across the nation causing 15% of climate emissions. Scottish Labour has said that the Scottish Government must be more ambitious if it is to address the matter and meet climate targets.

“Too many people in East Lothian and across Scotland are living in fuel poverty, and lack of proper energy saving measures in homes are contributing to emissions. This is not acceptable when action could be taken now to tackle these issues.

“The Scottish Government has set a target for over a million homes to be energy efficient with zero heat emissions by 2030 but this will require bold and transformative action with immediate effect, focusing on retrofitting and tackling fuel poverty. This could bring up to 17,000 new skilled local jobs across Scotland alone.

“Last week Scottish Labour called for a budget increase of £244million for the coming year, with radical action on energy efficiency to help reduce greenhouse gas emissions and lift families out of fuel poverty.

“It is time for the Scottish Government to listen to charities and environment groups, boost the climate budget and seize this opportunity to effect a lasting, green recovery for Scotland as we come out of the pandemic.”